Originally the Cleveland Trust Rotunda, this hidden architectural gem stands among a patch of dreary, unoccupied sky rises and store fronts in downtown Cleveland. Below is a view from outside with Euclid running across the foreground and E. 9th (unseen) off to the right.

Construction began in 1905 and ended in 1908. This is the site in 1906, just a year into construction. Though the exterior appears mostly complete only after one year, the vast majority of construction efforts over the remaining two years focused almost entirely on the stunning and intricate interior design. 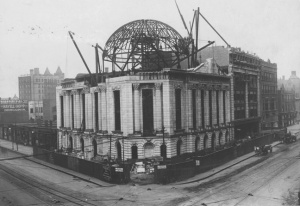 The rotunda was recently home to a festive holiday concert series titled “Circle in the City”. These pictures were taken during a live performance from the Cleveland Orchestra’s Christmas Brass Quintet. Beautiful building + amazing acoustics + best musicians in the world = one wonderful concert! 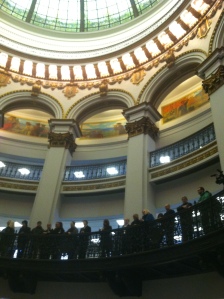 The stained glass dome – a defining feature of the rotunda. 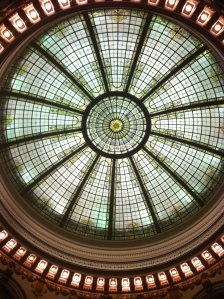 The three pictures below are brought to you courtesy of  Design Culture Cleveland’s blog (click here for link – great article and pictures). Note the ornately gilded trim design and original Cleveland Trust logo.

13 painted murals by famed artist Francis Millet encircle the rotunda inside. Millet completed the murals just years before his tragic death in the Titanic disaster. 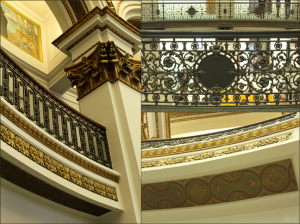 Next time you’re milling about downtown Cleveland, keep your eyes peeled for this historical gem located at the corner of Euclid and East 9th. Thanks for reading!

One thought on “Cleveland Trust/Ameritrust Rotunda”